Invisalign braces are clear plastic trays that you wear over your teeth. The trays are made in several standard sizes, which can be selected by orthodontists to match the size and shape of the teeth they will treat. While wearing them at night or when not speaking, the teeth gradually shift into place over time. 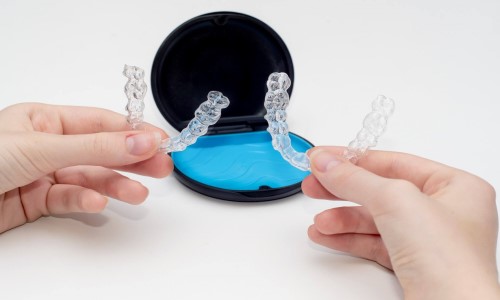 Your dentist or orthodontist creates a series of custom trays, each of which is worn for about two weeks. The length of time you will need to wear the trays varies based on your treatment plan. At first, just wearing the trays during normal daily activities with breaks for eating and brushing is enough to gradually move teeth into the correct position.

It is possible to remove the trays to eat and brush, but they will need to be worn for many hours each day in order for teeth straightening to occur. Because of this, treatment with Invisalign typically lasts about a year or more depending on dental health and age.

1. Better Oral Hygiene.
With braces, people have to spend more time brushing and flossing their teeth. This helps keep them cleaner but also takes away from the time they could be spending with family or enjoying themselves in other ways. With clear trays not covering the teeth like metal brackets, people will save time on dental care each day. The trays can be removed to brush and floss teeth, so it will not be necessary to brush after eating or remove them for other oral hygiene activities.

2. Variety Of Styles And Trays Will Be Available.

It is possible that different orthodontists will use slightly different clear aligner trays in order to fine-tune the straightening process over time. There are only a few metal brackets available, but any dentist has access to thousands of different plastic tray styles when using Invisalign. This gives people more options in terms of style and appearance, which may make it easier for them to feel confident when they are wearing their trays.

3. Treatment Is Usually Faster Than Traditional Braces.
Orthodontists can complete treatment with traditional braces in just over two years, but the same results can be achieved with Invisalign in less than one year. With clear aligner trays, it is possible to straighten teeth more quickly and achieve better oral health for people of any age. The shorter length of time spent with trays on teeth means that there will be fewer limitations on daily activities.

4. Better Self-Esteem And Comfort During Treatment.
Because clear plastic aligner trays are not as noticeable as metal brackets, people will feel more confident about their appearance when they wear them. They do not have to worry about hiding their braces or waiting until they no longer need them before enjoying social events like dates or parties at school. For teens and pre-teens, this may mean better self-esteem and less stress during the treatment process.

5. Flexibility In Treatment Schedules.
Treatment with traditional braces requires a commitment to wearing them for many hours every day in order to straighten teeth as effectively as possible. With Invisalign trays, people can wear them only when they need to – such as while eating or sleeping – which means that they do not have to take away from their daily activities in order to achieve desired results. It is even possible for parents of young children who are struggling with their first set of aligner trays to remove them for school or playtime.

6. Elimination Of Damaging Foods And Drinks.
During the first phase of treatment, it will be necessary for people to avoid chewing on one side of their mouth at a time. This is because it takes time and practice to train the brain and muscle memory not to chew with an imbalance. As teeth move into place and become straighter, chewing on both sides should become more comfortable.

However, those who wear braces must restrict themselves from eating or drinking some foods that can damage brackets and wires such as ice cubes, hard candy, popcorn kernels, and whole apples among others. Clear aligner trays do not require such restrictions as they are unlikely to cause damage during normal wear even if there is pressure against them from biting down too hard…

Who Is It For?

Invisalign is a cosmetic orthodontic treatment that is available for adults and teens who want to improve the look of their smile or fix a number of issues with straightening teeth. The trays are clear, which makes them less noticeable than traditional braces, but they may need to be worn for many hours each day in order to produce results.

Invisalign is an orthodontic treatment that uses clear aligner trays to straighten teeth over time. People spend less time with the trays on their teeth than they would if they wore traditional braces, which makes them easier to use and more comfortable to wear. Orthodontists can also fine-tune treatment plans in order to create a smile that is just right, which means that people can enjoy straighter teeth in less time.